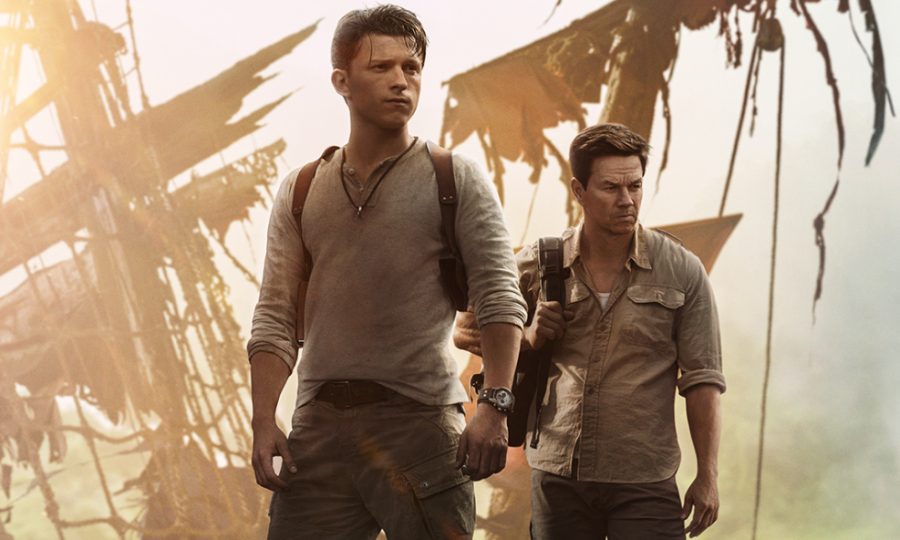 One of the most anticipated movies of 2022 “Uncharted” premiered on February 20. It was a star-studded film including big names such as Tom Holland, Mark Wahlberg, and Antonio Banderas. Here are my thoughts on Ruben Fleischer’s latest work.

Based on the video game with the same name, “Uncharted” is a sea adventure that takes the main characters around the world as they search for a 500-year-old treasure. The plot is that of a predictable action film where we get plenty of sword fights and foreseeable plot twists. Credit must be given where it is due as the film wasn’t boring and still kept me entertained throughout the story.

While there were many memorable characters, the best performance was truly given by Tom Holland who plays the lead role of Nathan Drake. The Spiderman actor executed the role perfectly and was perfect for the film, although you can tell a few of his scenes were thrown in to please his fans. There were many notable moments starring Mark Wahlberg as Victor “Sully” Sullivan who was able to provide a bit of comedic relief to otherwise serious scenes.

I wouldn’t count on “Uncharted” for any emotional moments as the ones that they did try to include didn’t feel sufficient. Many times in moments where characters had a change of heart or were reminiscing of the past did not feel genuine and seemed rushed. Whether this was due to poor acting or a bad script is hard to tell, but the movie doesn’t include enough emotion for it to be any more than your basic action film.

While I can’t vouch for the accuracy of the movie compared to the video game, I found the main villains of the film to be what the story needed to succeed. I could believe in the relationship between the main characters and the bad guys as they all fought for the same goal. I also found the relationship between the two leading men, Tom Holland and Mark Wahlberg, believable and brought out much of the comedy in this movie.

Visual effects were another area this film could have been better at as many of the fight scenes were obviously CGI and done poorly. There were many moments where it seemed odd that the characters were able to advance any further such as moments when I thought, “where did they find a boat?”

Although there were a few faults in the movie, overall “Uncharted” is a good action movie with a good cast. With a lot of charm still left, “Uncharted” is an 8/10. It was an enjoyable film that was definitely worth watching and is currently showing at the Livermore 13 Cinema.