Game Design Students Go Above and Beyond 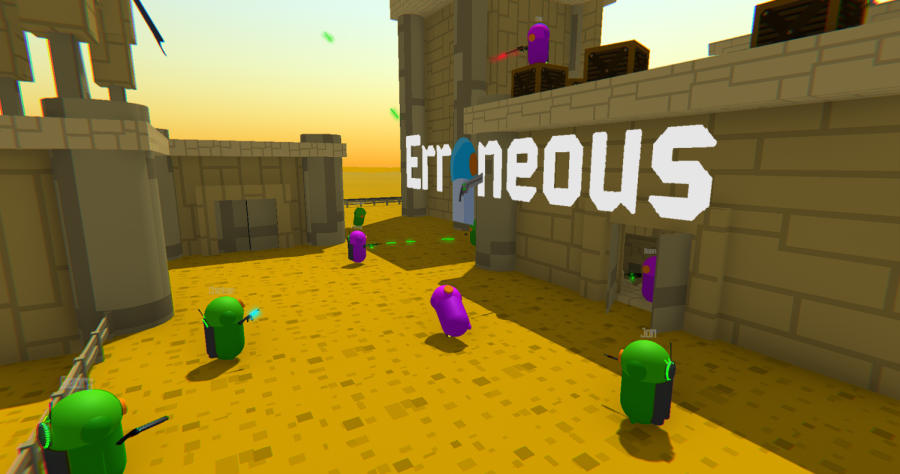 A player's in game view of Erroneous

Within the walls of room 402, skill and creativity are nurtured. Game design, a course taught by Miguel Baez, aims to teach students about the art of game design and to aid them in the development of their own games. With the coding behind games being intricate, the creation of in-depth games often takes an immense amount of time. Some designers, however, are gifted with the ability to create without an issue. Kai just so happens to be one of these game designers.

Erroneous is a first-person, multiplayer shooter game created by Kai and Kyler, two current game design students. Erroneous has been a multi-year project that Kai has nursed, his first edition dating back to 2018. Within the partnership, Kai finds himself responsible for the coding and structure of the game, while Kyler finds himself responsible for creating the models.

Within the game, you will find cylinder and cubical characters with hyper-realistic weapons. While fighting others, you have the option to travel across a wide variety of maps. These maps are all visual tellings of stories that Kai has written over the years. While you are not explicitly told what is going on, the scenes surrounding your character tell a story. To better explain this idea, Kai provided an example; Imagine you are playing. Your character is walking around and you see a skull on the ground. While there is no explicit statement of what previously occurred to result in the skull,  inferences can be made based on surroundings.

Kai currently is not sure how far Erroneous will grow, but is optimistic regardless, as “there will always be another game.” His best advice to those who are looking to create their own game is to never give up. Kai has made “four versions of Erroneous and 10 versions of a ton of other games.” The key behind him continually moving forward is his relentlessness and inability to quit. Kai continues to look at what is next instead of dwelling on what has happened.

Kyler’s advice was similar, stating “if you have an idea, and you know what you want to do, just try it.” There is never harm in attempting to execute an idea, no matter how complicated. You never know, it may become your own version of Erroneous.

As a teacher, Baez finds joy in watching Erroneous truly take off. While there are still kinks to work out, Baez states that Erroneous simply “encompasse[s] everything from a game development, game design, and programming perspective.” He hopes to support Kai and Kyler in the further development of Erroneous by providing an environment in which they can reach out for help.

So for those looking to try out a new game, make sure to check out Erroneous!